Rules for maintenance and
operation of facade systems SCANROC

All components of the SCANROC system are non-toxic, non-combustible and explosion-proof, do not pollute the environment during transportation, storage, installation, operation and disposal under the conditions of compliance with technical requirements.

The specific effective activity of radionuclides in SCANROC KEFSVOK systems and components does not exceed 370 Bq / kg. Radiological control is carried out in accordance with NRBU-97 / D.

Cargo operations must be carried out following safety rules established by GOST 12.3.009.

When arranging SCANROC KEFSVOK systems, it is necessary to comply with safety requirements in accordance with GOST 12.1.004.

When transporting and warehousing the components of the kit, the general safety rules according to GOST 12.3.020 must be followed.

When arranging facade systems SCANROC KEFSVOK, workplaces should be provided with lighting in accordance with DBN B.2.5-28.

Workplaces for arranging SCANROC KEFSVOK should be fenced. Production sites must be provided with the necessary safety signs in accordance with DSTU ISO 6309 and GOST 12.4.026.

When arranging SCANROC KEFSWOK facade systems and processing materials, the maximum permissible concentration of harmful substances in the air of the working area must comply with the requirements for the concentration of harmful substances in air according to particleboard 201, GOST 12.1.005 and GOST 17.2.3.02, noise and vibration level – GOST 12.1.003, DSTU GOST 12.1.012, ДСН 3.3.6.037 and ДСН 3.3.6.039.

The level of electromagnetic fields during the construction arrangement should comply with the requirements of GSanPiN 3.3.6-096.

Measuring the level of electromagnetic fields at workplaces must comply with the requirements of GOST 12.1.006.

Wastewater must be discharged into the sewer in accordance with the requirements of SanPiN 4630 and DBN B.2.5-64.

Soil protection from pollution by household and industrial waste should be carried out in accordance with SanPiN 42-128-4690 and GSanPiN 2.2.7.029.

Metal and tile waste should be sent for recycling.

In general, the system consists of brackets with thermal spacers attached to the wall, the supporting frame or the floors of the structure; vertical and horizontal profiles used to control the width of the air channel and the removal of the system as a whole; facade tiles that perform aesthetic and protective functions.

The delivery set must be packed in the factory packaging that protects the product from mechanical damage and the effects of precipitation during transportation and storage, except for technical documentation that can be wrapped with paper in accordance with DSTU 2191 (GOST 16295).

The warranty period for storage of products at the consumer is indicated in the accompanying documentation and begins on the day of shipment of the products (provided that the requirements of section 5 of the Technical Conditions are met).

The warranty period for the system is at least 7 years from the date of commissioning, provided that the consumer observes the rules for operating the system.

Storage conditions, as well as loading and unloading of products should ensure their safety from mechanical damage, exposure to moisture and chemically active substances. For storage of products, special sites should be equipped, and the products themselves should be located on clean surfaces or in factory containers and must be protected from atmospheric effects.

Rules for the care and operation of the SCANROC facade system

If necessary, the surface of the front layer can be washed with a brush manually, while water should not fall on the heat-insulating layer.

Scheduled inspection of the technical condition of the mounting frame of the ventilated facade system, fasteners and facade tiles must be performed every 4 years during the entire period of operation. The inspection is carried out by the owner of the structure, and if necessary, it is possible to attract technical experts from SCANROC or its regional representatives. SCANROC Company monitors the performance of the facade system throughout the entire warranty period. In the process of monitoring, an examination is made of the appearance of the facade tile, its presence of cracks and chips, measurements of the width of the air channel and the absence of corrosion and other damage to the frame of the hinged ventilated facade is checked.

During the construction and operation process, it is STRICTLY FORBIDDEN to fasten any parts or devices directly to the facade tile or mounting frame of the hinged ventilated facade, unless otherwise agreed and approved by the SCANROC company representatives.

The SCANROC facade system has excellent anti-vandal properties, which is confirmed by the SCANROC tile fracture tests. This ensures the longest and most comfortable operation of the system. However, the advantages of the ventilated facade do not end there, even if the facade tile has been damaged, it is quite easy to replace it, regardless of whether it is one tile or a group of tiles. You can always purchase the necessary amount of SCANROC facade tiles to replace damaged areas (for this you need to contact the SCANROC company managers, indicate the color number of the tile or send a photo of the damaged facade). It will also be practical if you save the remains of whole tiles for possible repairs. 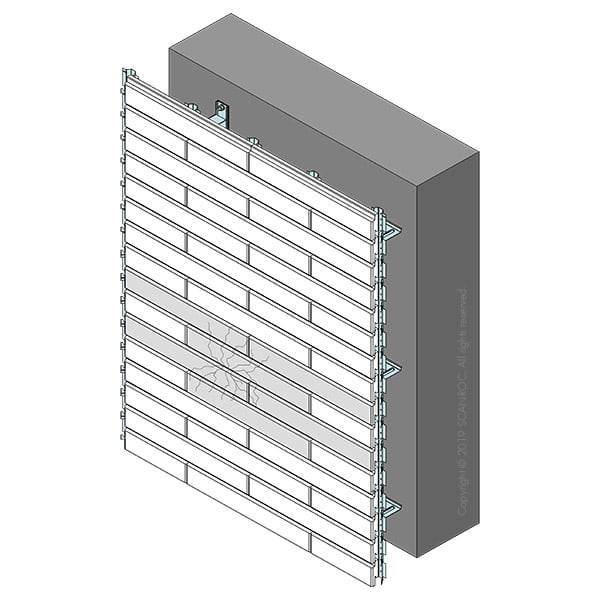 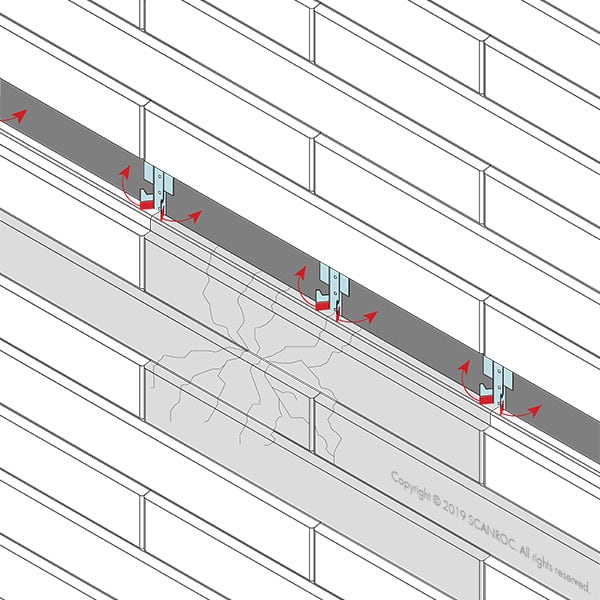 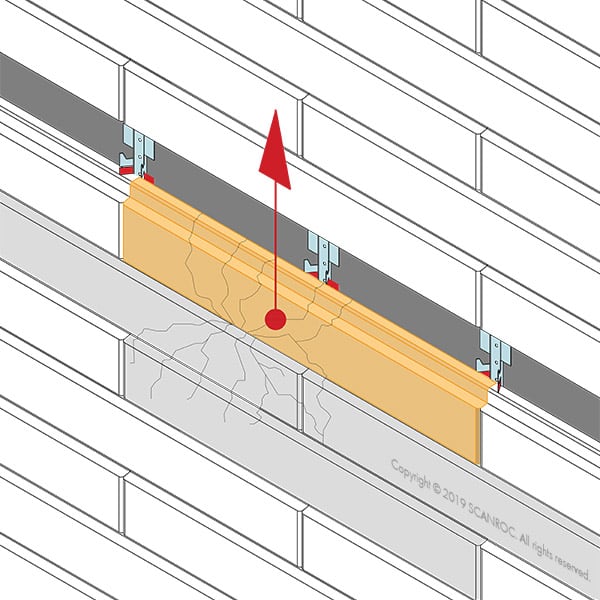 Picture 3. The squeeze antennae are bent, raise the tile

SCANROC facade tiles are hung on three adjacent racks with the help of special curly cutouts on the racks and are fixed by squeezing antennae. To replace facade tiles, you must:

Step 1. Break and pull out the top row of damaged tiles (Fig. 2)

Step 3. To release the lower damaged tiles, you need to lift them and pull them towards you (Fig. 3, 4)

Step 4. Sequentially from top to bottom, disassemble the damaged section of the wall (Fig. 5)

Step 5. Replace the damaged tiles with whole ones from the bottom row to the top, fixing them with squeezed tendrils.

IMPORTANT: do not allow construction and other debris to enter the ventilation duct – this reduces the efficiency of the ventilated facade. 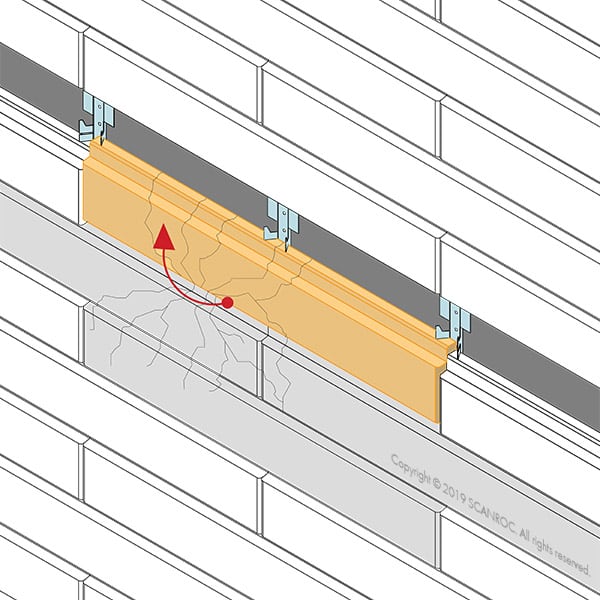 Picture 4. We remove the damaged tile by lifting and pulling it towards ourselves 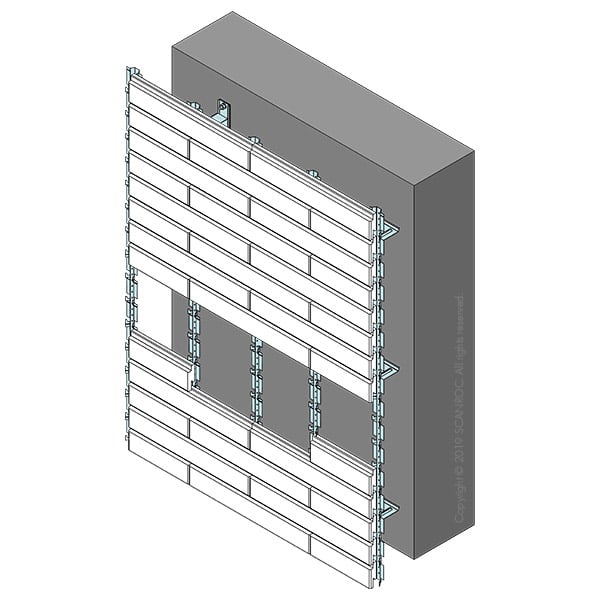 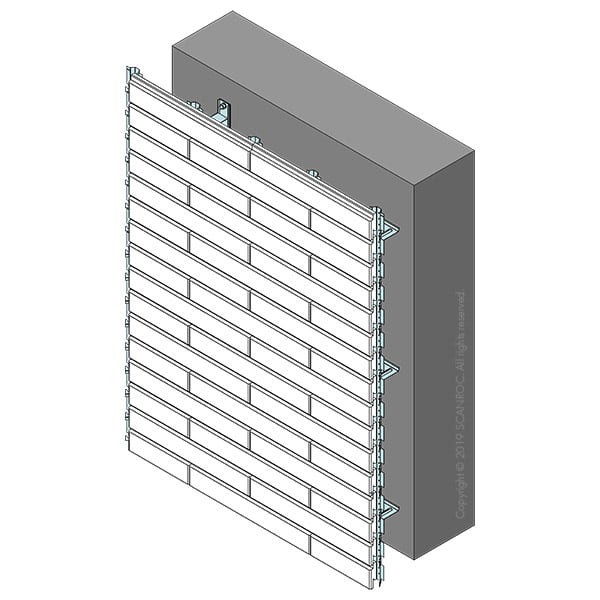 When installing any external elements on the already mounted facade, it must be borne in mind that their fastening to the facade tile or the frame of the hinged ventilated facade is not permissible. Fasteners (anchors, brackets, consoles) of air conditioning units, satellite dishes, drainpipes, advertising banners, decorative fences and boxes, other devices, mechanisms, parts need to be planted under a layer of insulation, additionally insulating them from the building wall. As an example, we describe the installation scheme of the external air conditioning unit, the installation of other external facade elements must be performed by analogy.

1. First of all, you need to carefully read the installation instructions for the air conditioner split system.

2. Remove the facade tile at the installation site, and then remove the racks and crossbars that interfere with the installation of the brackets of the air conditioning unit (but better, if possible, transfer the attachment points of the brackets of the air conditioner). Note: to use for dismantling the frame of a hinged ventilated facade or to cut separate elements of its frame with a grinder is STRICTLY FORBIDDEN.

3. Carefully remove a layer of a heater and if necessary dismantle consoles.

5. Install the brackets of the outdoor unit of the air conditioner according to the specifications of the manufacturer of the split system.

IMPORTANT: in order to avoid cold bridges, the split system brackets should be insulated from the wall with thermal pads with a thickness of at least 2 mm from foamed PVC or other chemically neutral materials with a thermal conductivity λ of not more than 0.06 W / (m⋅K) and, if possible, use for fixing plastic dowels. The air conditioning tube must also have a heat-insulating sheath corresponding to the above conditions.

6. Replace the dismantled consoles and the crossbar.

7. Install the insulation and secure it with the plate-type dowels.

8. Reinstall the dismantled racks, and also install the auxiliary racks necessary in the places where the air conditioning brackets are removed from the outer plane of the facade.

9. Install the facade tile. In the places where the brackets and tubes are output, the tile is sawed vertically along the width of the bracket (tube) and installed so that each tile rests on 3 adjacent racks. Sawing the tile along is not recommended, and sawing or drilling the tooth of the tile is categorically FORBIDDEN.

Schematic diagrams of the installation of air conditioning units, downpipes and satellite antenna brackets are given on pages 12-16 of the Care and Use Instructions (see below).

INSTRUCTIONS FOR CARE AND OPERATION